“She’s a little deranged. She doesn’t understand how subsidies work at all,” Czech Prime Minister Andrej Babiš said of MEP Monika Hohlmeier following the European Parliament’s Budgetary Control Committee’s early March fact-finding mission to the Czech Republic. Led by Hohlmeier, the objective of the mission was to gain insights into the distribution of EU funds and investigate Babiš’ alleged conflicts of interest in the process. The two Czechs in the six-person delegation – Tomáš Zdechovský (Christian Democrats) and Mikuláš  Peksa (Pirate Party) – were subsequently labeled “traitors to their own country” by Babiš and accused of “undermining their own Prime Minister instead of promoting Czech interests”. Later, on account of public pressure, Babiš apologized.

“Not an accident, but an intention”

During their two-day mission, the EU committee met with not only government representatives and other official bodies, but also small farmers, non-profit organizations, and journalists. “We heard worrying accounts from civil society over irregularities in the use of EU funds in the Czech Republic,” Hohlmeier said.

After the visit, Hohlmeier noted that the Czech Republic’s system of preventing and detecting conflicts of interest when taking subsidies was very weak, unclear, and easy to circumvent. The mission’s second finding was that the current system of allocating subsidies is skewed towards  big companies — particularly those in manufacturing and agricultural industries — rather than small farmers, the intended beneficiaries.

“I have the impression that this is not an accident, but an intention,” Hohlmeier observed. She added that “we arrived with a lot of questions, we got some answers. But we are leaving with a lot of new questions.” 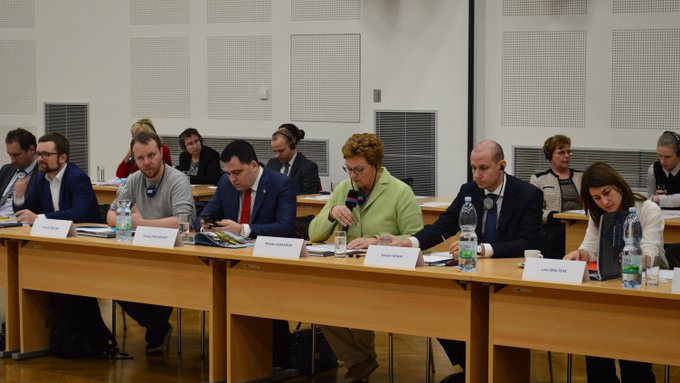 Members of the mission didn’t get a chance to meet the Czech Prime Minister and ask him questions directly. Though Babiš initially accepted a request for a meeting from the delegation, he later decided he didn’t have the room for all of the members and would meet only with a few envoys instead, and then subsequently cancelled the meeting altogether. He told the media that he “didn’t see it necessary to meet with them, since I don’t decide who gets subsidies and I never have. I have no conflict of interest.”

This is not the first time, however, that Babiš is facing trouble when it comes to EU subsidies and a conflict of private and state interest.

Conflict of interest and trusts

Discussions about Andrej Babiš’ conflicts of interest in relation to EU subsidies started at the beginning of 2017, when he was approaching the end of his mandate as the Minister of Finance. He became Prime Minister at the end of that same year.

Since an amendment to the Act on Conflicts of Interest came into force in February 2017, it has been illegal for a company owned by a Czech minister to receive subsidies, state investment incentives, public contracts, or to operate television and radio broadcasting and publish periodicals. In mid-2018, the European Union’s Financial Regulations also entered into force, which also described these kinds of ownerships as a conflict of interest.

Babiš came up with a nickname for the amendment: “Lex Babiš”. Since the 1990s, Babiš has overseen a conglomerate called Agrofert, which has subsumed more than 250 companies from a variety of industries — primarily the  chemical, food, agriculture and forestry industries — under its umbrella. It also owns one of the country’s biggest media outlets: Mafra. The company’s turnover is around 150 billion CZK (EUR 5.7 billion) a year and it employs over 25,000 people. Moreover, Agrofert swallows sizable shares of EU subsidies each year: last financial 2018 report estimated 2 billion CZK (EUR 74,4 million).

Since Babiš’ appointment to public office in 2013, the amount of subsidies Agrofert receives from the EU has nearly doubled. The holding company also receives state investment incentives and often participates in public procurements.

Several days before the amendment to the Act on Conflicts of Interest came into effect, Babiš founded two trust funds (AB Private Trust I and AB Private Trust II) and poured 90% of the companies shares into one and the remainder into the other. In his view, this solved the conflict of interest issue: on paper,  he was no longer an owner of the conglomerate.

But it isn’t that simple. The trustee of the two funds is Zbyněk Průša, a long-time colleague of Babiš who is the chairman of Agrofert’s board of directors. Moreover, the Czech Prime Minister is not only the founder of the funds, but according to Slovakia’s beneficial ownership register remains a beneficial owner who will still profit from their success.

Subsidised and defrauded. Visegrad EU funds under the eye of OLAF

The PM and his shaking chair

At the end of last year, a European Commission audit of subsidies from the Structural Funds confirmed that Babiš’ connection with Agrofert constitutes a conflict of interest. As the head of the government, Babiš has influence over subsidies policy, and was found to be personally profiting from it through Agrofert in violation of European laws. A second audit, which focused on subsidies from agricultural funds, led to the same conclusion.

The Czech Pirate Party issued a 45-page criminal complaint  featuring 58 [pages of] annexes. It states that “Andrej Babiš has never presented a single independent authority that would support his claim of not being in a conflict of interest”.

The situation has left many of the officials who deal with subsidies in a difficult place. Though the facts clearly state show a conflict of interest, government representatives continue to claim otherwise, with the Czech Minister for the Environment talking about “unsubstantiated speculations” and the Minister for Agriculture warning against “attacks on Czech agriculture”.

This isn’t the first time the Czech Republic and EU have had to deal with Babiš and his subsidies. In 2008, prior to his appointment to public office, he received 42,5 million CZK (EUR 1,7 million) from European funds for the reconstruction of “Stork’s Nest Farm”, a 70-hectare recreational complex featuring a hotel, restaurant, golf course, basketball and handball court, and playground, that was often used to host conferences. The site was built around the ruins of a former distillery and farmyard, and is dominated by a giant model of a stork’s nest.

By the time the reconstruction was complete in the spring of 2010, it was common knowledge that  Babiš, then known to be one of the richest people in the country as well as an unscrupulous businessman and capable lobbyist, owned the Stork’s Nest Farm.

But in the the autumn of 2010 in the weekly newsmagazine “Ekonom”, an article ran with the headline: “The owner of Agrofert holding claims that Stork’s Nest is not his. Secrecy because of subsidies?” Jiří Pšenička, the journalist on the story, had been working on a piece about the lives of [Czech] billionaires, but when reporting found that Babiš “was dodgy” about his new premises. Moreover, the official owner of the farm was impossible to determine: the firm was owned anonymously through stock shares.

The article from 2010 did not attract much attention, and the ambiguity surrounding the subsidy and ownership of the Stork’s Nest became just one of the many plot points in the career of a controversial billionaire. Three years later, Babiš tweeted about Stork’s Nest in the manner of a king talking about his castle: “My experience in business and politics has taught me that the best place to live is on my farm.” He switched tracks again shortly before being elected to office, claiming he had nothing to do with the farm, when asked by journalists, but then showing it off to his supporters asked. By 2017, even his allies had begun to demand an explanation.

At that point, Babiš told the MPs that his two adult children, Adriana Bobeková and Andrej Babiš junior, owned the anonymous shares of Stork’s Nest when the subsidies were granted. The shares of two other minor children and his wife Monika were held by her brother Martin Herodes. “Why didn’t I want to say the names of the shareholders? Well, because I didn’t want to endanger my children. My family! It’s the most precious thing I have!” Babiš concluded dramatically in the Czech parliament in 2016. “I couldn’t tell the truth! Every parent will understand!” he added. Almost fifty members of his political party (ANO) then stood for long applause.

The next chapter in the Stork’s Nest saga began in September 2017, when the police charged eleven people with subsidy fraud and of harming the financial interests of the European Union, the penalty for which is five to ten years behind bars. The accused included Andrej Babiš himself, as well as his daughter, son, wife, and brother-in-law, people from the statutory bodies of the Stork’s Nest Farm and a number of other companies connected to it.

The police gathered significant evidence that Stork’s Nest Farm, far from being an independent business, was in fact connected to the colossus Agrofert, meaning it had no right to receive subsidies reserved for small to medium-sized businesses. OLAF (European Anti-Fraud Office) investigated the case too, and reached similar conclusions, adding that there was also “false and concealed information” in the grant application.

In spite of these facts, Czech prosecutor Jaroslav Šaroch put a halt to all proceedings against the accused in fall 2019, saying that while there were “highly above-standard relationships” between the Stork’s Nest Farm and the Agrofert companies, that the Stork’s Nest Farm could still be viewed as a small to medium-sized business. Šaroch added that there was no proof of intent to deceive on the subsidy application.

As MEP Hohlmeier highlighted at the end of February, subsidy-related issues in the Czech Republic aredire not just because of the case of Babiš, but also because of a set of subsidy distribution rules that are set up to favour primarily big companies, especially those in the agricultural sector.

In mid-2019, the weekly newsmagazine “Euro” compiled a table of the largest recipients of European subsidies for business development and environmental protection. Despite the fact that, according to EU rules, the money was meant to be directed towards small to medium-size businesses, firms owned by billionaires reign the top places of the table. Since 2014, the largest sum — over 800 million CZK (EUR 30 million) — has gone to arms-dealer Jaroslav Strnad and his son Michal (who together are the owners of the Czechoslovak Group, Tatra Trucks and Excalibur Army).

In fourth place, with more than 400 million CZK (EUR 15 million), is Babiš’s Agrofert managed by trusts. When the agricultural subsidies and investment incentives from the state are taken into account, Agrofert has taken 6,5 billion CZK (EUR 242 million) in subsidies between 2014 and 2017.

Monika Hohlmeier told Czech News Agency that she and the two Czech MEPs that belonged to March’s fact-finding mission received 2,500 threats and insults within days of their visit. But many Czechs also showed support and apologised for Babiš’ behaviour, and David Sassoli, the President of the European Parliament, said he would complain to the Commission and Council leaders about the Prime Minister’s “unacceptable” attitude towards the delegation. Zdechovský, one of the Czech envoys, added that following the mission, he was “ absolutely sure that Babiš has a conflict of interest.”

By Hana Čápová
Featured graphics by Lenka Matoušková
This text was financially supported by GACC (The Global Anti-Corruption Consortium) aimed at the Visegrad countries. Member centers Átlátszo  and Direkt36 from Hungary, Fundacja Reporterów from Poland, Ján Kuciak Investigative Center from Slovakia and investigace.cz from the Czech Republic are working on the project.
SUPPORT investigace.eu
read more

Impérium AB – Database of companies and subsidies of Andrej Babiš

How to Bribe a Judge

Website investice.eu is operated by a non-profit organization Czech Centre for Investigative Journalism.